Was Slapping Bhansali an Act of Terrorism?

It's been a while since you have seen regular posts from me on my blog, and that's simply because I had set my priorities elsewhere. I did miss blogging though, and I wanted to blog regularly again but had to focus on some other aspects of my life.

A few of my friends even wrote to me inquiring why I haven't been posting anything on my blog, and expressed that they missed my posts. To all those kind friends and my general readers, I thank you for your generous support. I also want you to know that I am back now, and intend to write more regularly on my blog.

Today's post is in response to a message that I received today from a friend who wanted my opinion on the recent incident of filmmaker Sanjay Leela Bhansali being slapped by some members of the Shri Rajput Karni Sena for the alleged inappropriate portrayal of Rani Padmini in his upcoming film Padmavati.

The first thing that I would like to state about this incident is that I strongly condemn the violence inflicted on Mr. Bhansali. Yes, slapping and breaking parts of a movie set are all expressions of violence, and should not be condoned! As a general rule of thumb, the only violence that can be condoned is the one committed in self-defense. The incident described above clearly doesn't fit that category.

That said, I won't go to the extent of calling this incident an act of terrorism. The reason I bring this up is because the filmmaker Anurag Kashyap called it so in his tweet: "Hindu extremists have stepped out of twitter into the real world now.. and  Hindu terrorism is not a myth anymore."

There is no universally agreed upon definition of terrorism. According to Wikipedia, "The international community has never succeeded in developing an accepted comprehensive definition of terrorism." So, I will attempt to analyze this incident from what we commonly understand as acts of terrorism. Examples of terrorist attacks are the 9/11 attacks of US in 2001, the 26/11 attacks of Mumbai in 2008, or the more recent Uri attack and Baramulla attack in India. The list of terrorist attacks in recent history is endless, but there is a common thread across all these attacks. It's not that they involved the loss of human lives, although that was true in the majority of the cases. But there have also been terrorist attacks that thankfully didn't result in any deaths, such as the 2012 Pune bombings. The common thread in terrorist attacks is that is that they are all carefully planned and orchestrated to create horror and terror among the common populace. The Bhansali-slapping incident clearly doesn't fit this representation. At most it could be described as an incident of rioting, which is a form of civil disorder characterized by a group lashing out in a violent public disturbance against authority, property or people.

Again, I don't condone rioting, but a riot is not the same as terrorism. Riots are more a spontaneous reaction to a perceived grievance. Sometimes they may even be an expression of hatred against a race or community, but still they are characterized by impulsive, chaotic and herd-like behavior by a group of individuals. The difference between terrorism and rioting is the same as the one that exists between a cold-blooded murder and a crime of passion. So calling the Bhansali-slapping incident an act of terrorism is completely inappropriate.

And it is even more inappropriate because Kashyap and his pseudo-secular companions in the entertainment industry, media and politics never use the term "Islamic terrorism" in their vocabulary. In fact, sometimes they go all out to even avoid using the term "terrorism" when they are perpetrated by Muslims. Below is an example of the sanitized coverage by Hindustan Times of the terrorist attack that happened at the Louvre museum in Paris two days ago. 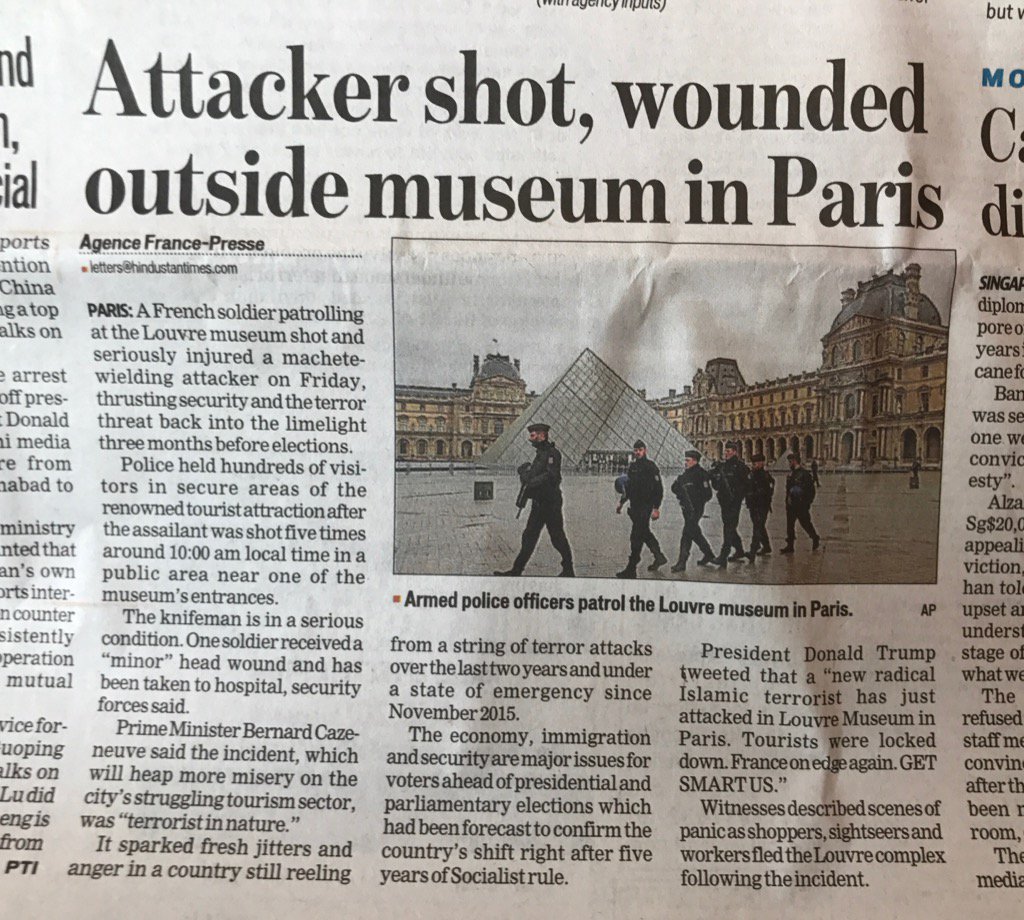 Again, lest I be accused of Islamophobia, I must say that I have nothing against Muslims. Muslims are human beings like any other person on this world, and deserve to live without fear of any form of persecution. In fact, some of my best friends are Muslims, and not just any Muslim but Muslims from Pakistan, the purported archrival of India. Sure, I have come across a few fanatic Muslims in my life, but I have also known a few fundamentalist Hindus.

So what I am essentially against is the double standards used by the so called "intellectuals" of our society in describing different acts of violence. It saddens me when one of the prominent media personalities like Rajdeep Sardesai refuses to cover the recent Dhulagarh riots in West Bengal where Muslim mobs attacked and looted Hindu shops and houses and set them on fire. It pains me when the same "liberal and secular intellectuals" who speak for the 'right of speech' of people who shout slogans in favor of terrorists--like Afzal Guru, for instance--don't speak in support of authors such as Salman Rushdie, Taslima Nasreen and Tarek Fateh, and even actively oppose their participation at literary festivals.

To be continued...: I will share my thoughts on the issue of "artistic liberty" in my next post.
at 6:16 PM