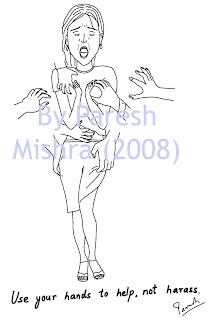 On the eve of new year's day, two women were molested by a group of 50 people in Mumbai. Similar incidents happened in Delhi, Kolkata, and other cities. In Kolkata, motorcycle gangs harassed women near Hotel Park for many hours. What is happening to our country? Have Indian men stopped respecting women? According to the National Crime Records Bureau report of 2006, a total of 164,765 crimes against women were reported in India during 2006. This is an increase of 5.9 percent over 2005, and a whopping 15.2 percent over 2002. The Times of India translates these figures to an average of 18 women being abused every hour; that includes two rapes, two kidnappings, four molestations, and seven incidents of cruelty from husbands and relatives.

What is the cause of this disturbing trend? Frankly, I don't have any clear answers to the question I am asking. It could be our slow justice system that allows perpetrators of crime to easily escape conviction for decades, and sometimes for ever. It could be the spillover effect from the hooliganism promoted by politicians; if you can get away with rowdyism on political issues, why cannot you get away with vulgar behavior towards women? It could be the double standards we have in our society towards women and sex; it is considered immoral to kiss or hug in public but some people don't flip an eyelid while demanding dowry or beating up their wives. It could be our lack of courage to protest against injustice; why else do bystanders don't intervene and remain mute spectators when a woman is harassed? It could be our extraordinary ability to get used to everything, including things that are evil; but is it really an ability, or is it sheer learned helplessness?

Thinking more about it, I think learned helplessness could be the major issue here. We have started to feel having no control over the situation; the problem seems too pervasive. It does not seem possible to change the scenario for better. Women seems to have internalized the problem; when rowdy elements harass them, or when their husband and in-laws abuse them, they question themselves of what they did wrong instead of seeing the problem in the perpetrators. So, is there a way out? I think, yes. To start with, we need to be aware of the helplessness trap that we tend to fall into. After being aware, we need to start taking steps to overcome our helplessness, even if they are like small baby steps. Let's not take pride in our so called "ability to adjust with everything." Instead, let's try changing ourselves and our immediate environment. We may not have control over what's happening in distant parts of our country, but we do have control over what's happening to us, in our home and in our localities. Let's be the agents of change in our own lives and in our own families. Let's extend our hand in support of help, and halt the hands that attempt to harass.
at 12:16 AM