Bullshitting: Can you tell what's wrong with this picture?

Can you identify what is wrong with the above picture that is taken from the Twitter feed of The Indian Express? Several things actually, but you will probably not be able to identify them until you click on the news article (written by Shaju Philip, dated June 26, 2018) and read it completely.

If you only read the headline of this news article on some social media platform--which is a very common practice these days--you will most likely end up with the impression that five Hindu priests sexually abused and blackmailed a woman. After all India is a Hindu majority nation, so the usage of the term "priests" in the headline should most likely mean Hindu priests. Right? Even the sketch accompanying the news headline and article has been (perhaps deliberately) made in saffron color, a color most strongly associated with Hinduism. So why would you be wrong to assume that the culprits here were Hindu priests? It's only when you read the article, do you realize that priests referred to in this article were actually Christians.

It is not just the Indian Express that is guilty of providing misleading anti-Hindu headlines. Many other mainstream newspapers do the same regularly. For example, take a look at the screenshot below from a DNA India news article dated May 23, 2018 (written by DNA Web Team): 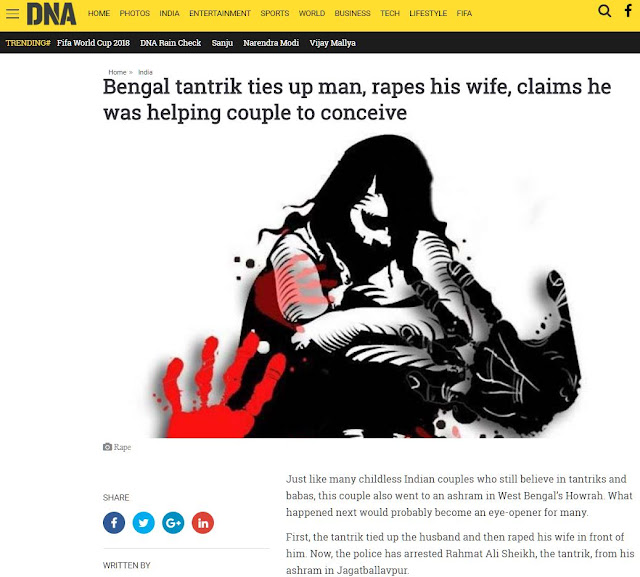 If you only read the headline of this news story, you will be sure that this is a case of a Hindu priest raping a woman. After all, the term tantrik generally refers to a Hindu priest who practices the ancient Hindu tradition of tantra. After reading the first paragraph of the article, you will be damn sure that the article is referring to a Hindu priest, because it talks about the victims' belief in tankriks and babas, and how the culprit lived in an ashram. The term baba again typically refers to a Hindu ascetic, and ashram is a Hindu hermitage or monastery. So why would you suspect that the culprit in this case is not a Hindu priest? Only after you reach the second paragraph of the article and read the name of the rapist (Rahmat Ali Sheikh is a Muslim name) do you realize that the rapist is a Muslim priest.


In both these cases the actual culprits were Muslim priests, but you won't know that unless you carefully read through the news articles. You have to literally read these articles with the eye of a diligent researcher or a detective to notice the true religion of these rapists, because the authors made sure to hide that information deep within the text of articles. In The Times of India article, you realize that the rapist is a Muslim priest only after you reach the second paragraph when you find out that his name was Warsi (a Muslim surname). Similarly, in The Hindu article, you discern the rape accused to be a Muslim priest only after you have read about 60% of the article and come across the information that the accused was supposed to perform certain rituals for the victim at the Ajmer dargah (a Sufi shrine in Rajasthan).

I am neither anti-Christian nor anti-Muslim. Some of my closest friends are Christians and Muslims. However, I strongly oppose mainstream media's deliberate attempt to malign Hinduism. I had discussed this a few months ago in context of the Kathua rape case. And frankly, it doesn't give me pleasure to write about this issue again. However, the anti-Hindu onslaught of the media just seems to be getting stronger by the day. I don't fully understand why many media houses in India are so anti-Hindu. It seems like many of the media houses have been corrupted by either Marxist philosophies and/or are owned by people who are anti-Hindu. It is an irony (or perhaps a convenient deception) that some of the publications from these media houses have the word "Hindu" in their names (e.g., The Hindu or The Hindustan Times).

Frankly, I don't mind some people harboring anti-Hindu sentiments, because there will always be some prejudiced individuals. It's difficult for people indoctrinated within dogmatic traditions to appreciate Hinduism, that is easily one of the least dogmatic and least tyrannical religions in the world. Not that Hinduism is perfect. It sure has certain practices that deserve to be critiqued. However, deliberately hiding truths and using blatant lies to denigrate Hinduism and demonize Hindus is something that is completely unacceptable.

The Illusory Truth Effect
The anti-Hindu and "Breaking India" forces are using the Goebbels principle of "manufacturing a lie so big and repeating it so often, that people start believing it as the truth." We know from research done in the field of Social Psychology by Fazio and her colleagues that such techniques do succeed in creating an "illusory truth effect," which refers to the finding that people do start believing false claims when they are exposed to them multiple times. The number of times media houses have been caught peddling bullshit is impossible to quantify here, but I am sure you must have come across many such instances.

What Can You Do?
So is there no way out of getting over the bullshit peddled by media houses? Yes there is, although it is not an easy task. Here are three things that all of us can do to counter anti-Hindu (or any other form of) bullshit: