Global warming is not a problem of the future anymore. Cyclones, hurricanes, death of corals (the thermometers of oceans), migration of fishes, flooding of coastal areas by the expanding sea, are all proofs of global warming being a problem of today. Recent CNN-IBN reports show that several towns and villages in India are already being devastated by the rising sea levels caused by global warming.

I have been taking lot of personal steps that will reduce my contribution to global warming (e.g., recycling paper, using both sides of paper, keeping windows and doors open instead of using AC in summer, keeping the TV unplugged when not in use, more use of public transport and walking instead of driving, recycling plastic, etc.). I have even started reducing the time I spend under the shower, but recently I realize even that is not enough. According to U.N.’s Food and Agriculture Organization, the top three contributors of greenhouse gases that cause global warming are: (i) Factories/Industries, (ii) Meat Production, and (iii) Vehicles. Yes, the meat industry generates more greenhouse gas emissions than vehicles. So, as long as I am eating a lot of non-vegetarian food, I am contributing substantially to global warming. 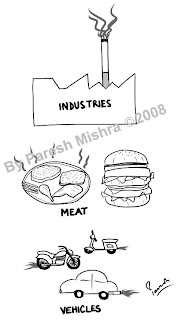 I have decided to go vegan. Of course, I can’t go 100% vegetarian right away; first, I have to finish the chicken that is in my fridge, but it’s not just about that. I don’t think I am ready to be 100% vegetarian yet, but I surely am ready to be a 90-95% vegetarian. I am deciding to reduce my meat intake to the bare minimum. In fact, that is how it was in India for me. At home in India, we ate non-vegetarian food, but only occasionally (like once a week or so) and that too in small quantities. Then there were three to four months when no non-vegetarian food was allowed into the house because they were auspicious months according to the Hindu calendar. But my eating habits had changed since I came to the US, and I have been eating quite a lot of chicken, almost daily.

Of course, many people still don't see global warming to be a problem that needs immediate attention. There are others who are aware about global warming, but do not realize the extent of catastrophic changes it will bring into our world. I think the denial is very similar to what happens in case of smoking. Smokers often psychologically downplay the ill-effects of smoking, and see it to be something in the remote distant future. Then one day the problem suddenly becomes real when the doctor announces (say) cancer in the lungs. However, strictly speaking there was nothing sudden about the whole matter, because the body was taking the beating all these years and the smoker had only ignored these tell-tale signs. Hopefully, mankind will realize the dangers of global warming, and do everything to bring earth back to shape before it is too late. Our existence depends on how healthy our earth is. Let’s save the earth and ourselves from destruction.